The sensible side of my brain suggested I just ‘sit this one out’ as we pulled up for a swim at Josephine Falls in Cairns, Australia.

Because ‘I had just washed my hair’ and ‘I’ll be damp for the rest of the car journey’ and ‘I have just gotten over a cold,’ as well as other things your mother might say.

But, as I’m all over this ‘living in the moment’ thing, off I went to give it a try.

I cautiously stumbled my way along the wet, slippery rocks and, after tripping over twice (gravity has a way of messing with me like that) I dipped my toes into the ice cold water before deciding that ‘nope, I don’t want to do this.’ 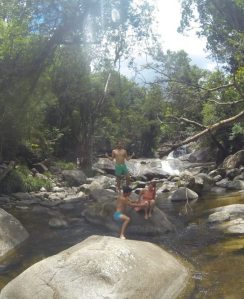 Here I am, being helped across a rock. They were REALLY slippy, really!

I did not want to swim in the ice cold, not so clear, waters. I did not want to drag my so pale and cold it was nearly blue body any further than I’d already made it. And I sure as hell didn’t want to join those crazy kids whizzing down that collection of rocks and water that they were calling a slide.

My boyfriend, my friends and every other tourist in the world hopped into the water, totally not phased, while I stood and wondered why an earth I was so worried?

Well, I was so worried because fear and anxiety have a way of catching you out like that. When you least expect it, they’ll just creep up on you and say ‘by the way, you’re not up for this!’ and there’s not much you can do, apart from maybe cry.

So yep, I was standing half-naked, clinging to a rock, in front of a bunch of happy splashy swimmers and my eyes began to fill with tears. (I did have to take another look around to confirm that, no, it was not 1995 and, no, I was not on a primary school swimming trip.)

A man’s persistent shout finally drew the ever-growing attention away from me. (OK, so the happy splashers were more interested in enjoying their holiday than in little miss weepy, but it felt like they were staring.)

“Violet!” he shouted, over and over again.

He was trying to coax his daughter down the ‘slide’.

She was five years old and she was scared too.

I could almost hear her thoughts as she sat at the top of the rocks looking around and assessing the situation.

What if those rocks fall on my head? What if I scrape my bum on the way down? What if I can’t swim once I reach the bottom? And how cold is it EXACTLY?

Violet looked over to her Mum to gain some sort of approval that this was OK to be doing (she’d obviously already worked out that Dad’s ideas were not always to be trusted) and Mum responded with a big thumbs up. (Note that Mum was intent however on not taking part in the sliding. I imagine it was something to do with the fact that she’d just washed her hair, or didn’t want to be damp in the car, or was just getting over a cold.)

But just as little still unconvinced five year old Violet was about to give up, to forget all about this silly idea and to spend the rest of her day warm and with freshly washed hair, her big sister stood close and held out her hand.

Violet took a long look at it, and then, just like that, she smiled, grasped it tightly and let her sister guide her to the starting point. And finally, off they went, hands entwined, giggling and squealing and spluttering with excitement all the way down.

“At last Violet!” I thought. And then I stopped, and took a long hard look at my 25 year old self.

And, as I continued to assess the entire situation, my lovely, patient (SO. VERY. PATIENT.) friends held their hands out to me too.

I grabbed them. They led the way to the top of the rocks and I grasped on tightly, screamed A LOT, and we all giggled and squealed and spluttered our way down with even more glee than the actual kids. 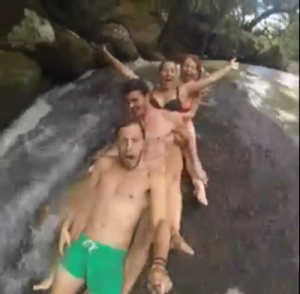 There I am at the back, screaming and clinging on for my life.

And it got me to thinking about the difference a helping hand or three can make when you’re feeling a bit wobbly.

Just knowing that someone gets your worry is big enough. But having a person, or even people(!), that are willing to grab you by the hand, to tell you it’ll all be OK, that you might even have some FUN, and even to drag you through the scary, slippy, rocky bits if they have to. Well, that’s bound to have you squealing and giggling with excitement once you make it out the other side!

So next time something, anything, (going down a slide for Christ sakes) makes you feel all swirly in the bottom of your tummy, and your brain tells you all the reasons why you shouldn’t: Grab hold of those precious helping hands and jump right in!

Start feeling the fear and doing it anyway.

Take the plunge. Into the deep end. And make a splash.

You’ll be glad you did.

4 thoughts on “Feeling the fear and doing it anyway (with a little helping hand).”

Check out my latest posts here:

Laughed until my belly hurt 😂 and ate until it did too! These guys though 👌🏻The English + The Aussies, as if no time has passed at all ❤️
Ain't no party like a hot tub sparkler party 🎉🌟 #NYE2017 🍾
Double-dating 👫👫Us gingers and our bloomin' gorgeous other halves 😍 🍸🍹
Fireside at the pub, red wine + beaut grub ❤️ oh, and some besties! LOVE 👭👭👭